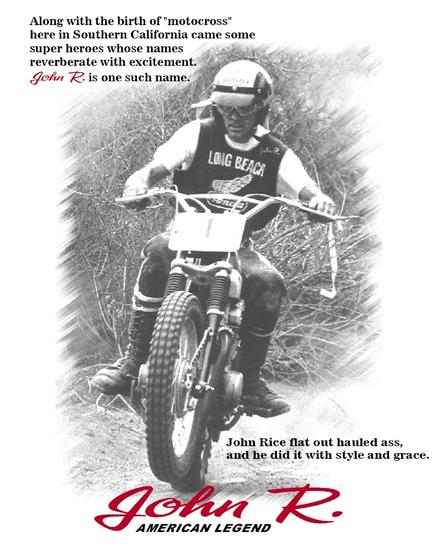 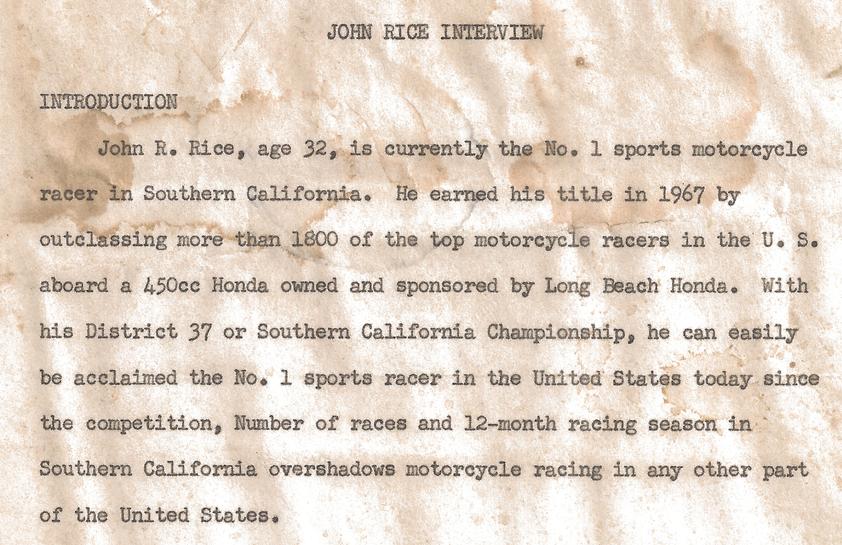 The Trailblazers Motorcycle Club elected John Rice, better known as “John R,” as one of its Hall of Fame inductees for 2012. He joins previously announced inductees Jim McMurren, Eddie Lawson, Bob Sirkegian Sr., Dan Rouit,Steve Scott, Sam & Gene Dempsey and Ray Tanner who were all honored at its 68th annual banquet on Saturday, April 14, 2012.
John was born in 1935 in Long Beach and graduated from Jordan High School in 1954. He was married and has two daughters, Robin (Rice) Capps and Tami (Rice) Greenhill, who is still an active motorcyclist.

Rice was, as many young men in the 1950s, very interested in motorcycles and bought his first two-wheeled ride, a Cushman scooter in 1956. That only lit a spark however and soon after he purchased a BSA 650 Golden Flash. He rode more and more and then decided to take the next step and try racing. John purchased a 350cc BSA Catalina Scrambler and was ready to go for 1957.

His first “race” was at the old Lancaster fairgrounds and didn’t go very well. John entered an enduro, not understanding that an enduro is a timed event, and as was his style, he rode wide open the whole way. Next he tried a Scrambles race at the “Rusty Nails” track in San Pedro and led the race until he got a flat tire on his BSA. Scrambles was more to his liking and soon became his favorite type of racing. He rode every Scrambles race that year, finishing 7th in the district and a very credible 5th in class at the Catalina Grand Prix.

In 1958 John joined the Army and was stationed at Fort Ord. He continued to race almost every weekend, breaking his arm at Perris when he fell and was run over by Elliott Schultz. He came up with a story that the Army would buy; however, he cut the cast off his broken arm every week and had the Army medics re-do it on Mondays. That, he says, took a lot of explaining.

At the time Fred Moxley of Lakewood BSA helped him and stored his motorcycle for him. One weekend he left the base and wasn’t going to race, but decided to go to Perris to watch and saw a young rider racing his BSA. John asked the rider what he was doing on his BSA and the rider promptly said Fred Moxley said it was okay. Thus began a friendship with Monte Darling that has lasted ever since.​

John left the Army in September of 1960 and came back to Southern California and began working in the aircraft industry for a while, then motorcycles called again and he went to work for Monte Darling at Norm Best BSA in Buena Park. He stayed in the motorcycle business and later accepted an offer to work at Long Beach Honda, where he worked for the next 12 years.

At Long Beach Honda he started riding Honda 305 Super Hawks because they were faster than his BSA. He rode District 37 events every weekend and even rode Ascot Park as an AMA pro Novice in 1961 and 1962 for Norm Reeves. John decided that professional racing at Ascot was just too dangerous and wasn’t as much fun as Sportsman racing, so he returned to District 37 racing. In 1967 he got a Honda 450 twin and went to Perris to try to beat one of his heroes, Jim Hunter. He won the number one plate in the very tough 500 Expert class in 1967 and 1968.

While doing all of the Scrambles in Southern California he managed to ride Hopetown several times, eventually winning the 100cc class and the 125cc class on DKW for Ted Lapidakis. He also won the 350 and 500 Expert classes, almost winning the Open Expert on a 501 Maico, it broke while he was leading. In the last year of the Elsinore Grand Prix, while leading overall, he hit aspectator, crashed and broke his nose. He got up and went to the pits to repair the bike as best possible and ended up finishing second to Steve Hurd.

Rice also won the District 37 Perpetual Trophy for the 400 Expert class that year. The names on the trophy are a who’s who in Southern California racing history. Next he decided to try his luck at District 37 motocross and in 1969 became the number one rider in the 500 Expert class. He continued riding motocross until 1976 when he quit racing and started in another sport, endurance horse racing. In 1996 John again began racing with AHRMA Vintage Motocross on a vintage Honda. Unfortunately he broke his hip, which ended his active racing days.

John rode for, and was sponsored by Long Beach Honda, Ted Lapadakis, Frank Cooper, Norm Reeves Honda and Norm Best BSA. He has always been a serious competitor and definitely a trailblazer. He has lived in Ridgecrest, CA since 1995 and still rides off-road as often as he can and helps the Viewfinders Motorcycle Club lay out desert race courses and put on their races.

John Rice is still active in motorcycling and a true trailblazer, racer and a credit to the sport. He is one of the ironmen of early Scrambles events and motocross and a well-deserved inductee into the Trailblazers Hall of Fame.

The 68th annual Trailblazers banquet was held on Saturday, April 14, 2012 at the Carson Center in Carson, CA. The evening’s dinner and awards presentations followed the
​Tom Cates Memorial Bike Show. For more info on the Trailblazers, please visit them at www.TrailBlazersMC.com.​